As a rare disease with a wide range of symptoms, Amyloidosis can be difficult for doctors to recognize. The disease presents itself differently depending on the type of Amyloidosis and which organs are affected. Delays in diagnosis are common, and some suffer for years while seeking answers. As a result, the road to diagnosis is often too long and winding, resulting in serious consequences for patients.

According to a survey of 575 patients conducted by Mackenzie’s Mission in 2019, over 60% of patients surveyed saw between two and four doctors before receiving a diagnosis, and another 24% saw five or more. 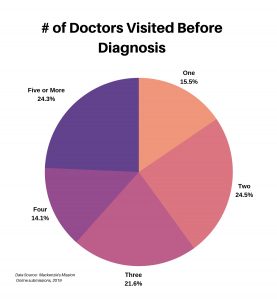 Lisa was diagnosed with Tracheobronchial Amyloidosis in 2011. She was 41 years old and had only 39% lung function. After working as a first responder for ASPCA in post-Katrina New Orleans, Lisa began having breathing problems. She assumed it was a reaction to the dust and debris she was exposed to in the hurricane zone.

In 2006 she was diagnosed as being severely asthmatic and was treated with inhalers and nebulizers. None of the treatments improved her symptoms and caused multiple side effects, including manic episodes and weight gain. Her health continued to decline.

Now unable to work due to her breathing problems, Lisa moved back home with her elderly mother in New York. She continued to seek treatment while rapidly losing lung function.

Finally, in 2011, she once again switched pulmonologists in her search for answers. Lisa’s new doctor took her off the steroids and did a bronchoscopy. They found a 2cm mass in her trachea, a mass so big it prevented the scope from going into her lungs. A biopsy, including congo red stain, revealed a diagnosis of Amyloidosis. Lisa’s was the first case of Tracheobronchial Amyloidosis diagnosed at the Albany Medical Centre in New York.

Thankfully, Lisa’s pulmonologist referred her to Dr.Berk at the Boston Medical Centre. After treatment with low dose radiation and chemotherapy, including Velcade, she has been steady since 2014.

Lisa, at the age of 49, is now reliant on a scooter to get around and is on oxygen 24/7. Despite her battles, she has a beautiful attitude towards life, facing her troubles with grace and bravery. In Lisa’s words: “Life is always an adventure, right?”

Len suffered from symptoms for two years before receiving a diagnosis in 2012. After not feeling well, he visited a naturopath who helped alleviate some of his symptoms. He was having issues with his heart, and blood work showed a problem with his kidneys.

He was sent to a kidney specialist who ordered a biopsy. Within 24 hours he was given a diagnosis of Amyloidosis, with further testing showing it was AL. A bone marrow biopsy was also performed to rule out the possibility of multiple myeloma.

Thankfully, Len was admitted into a trial and received chemotherapy with melphalan, dexamethasone, and antibiotics. Within six months, he was in full remission!

Len has a great sense of humor and continues to spend time enjoying the things he loves. In Len’s words, “We power on as life can be short.”

Jan was diagnosed with AL Amyloidosis affecting her heart, skin, autonomic and peripheral nervous systems in 2009 at the Mayo Clinic in Rochester, MN. She visited Mayo after suffering from symptoms for over six years and was diagnosed within days.

Early symptoms included swelling, trouble walking, difficulty swallowing, tingling and numbness. According to Jan, some days, “it felt like her legs didn’t respond to her intentions for them to move.”

As her symptoms progressed, Jan had problems chewing and struggled to even open her mouth wide enough to eat. She was out of breath and lightheaded when standing, sometimes accompanied by lower chest pain. Jan suffered from severe fatigue and some days was unable to move her legs or lift her arms. Everyday activities required extreme concentration. Other symptoms included thinning hair, brittle fingernails, and stiff, painful hands.

She suffered from these symptoms for six years.  She faced x-rays, ultrasounds, MRI’s, CT scans, a stress test, an angiogram, an echocardiogram, and a pulmonary function test. As her health continued to decline, Jan’s doctor assured her things were normal and that she had the heart of a twenty-year-old.  Despite her doctor discouraging her, she decided to head to the Mayo Clinic.

Thank goodness she pushed through and advocated for herself! After four days of testing at Mayo, she was diagnosed with Amyloidosis.  In 2009, she had a partial response to her stem cell transplant. Two years later, after doctors discovered a blockage, she received a pacemaker.

In 2016, her light chains rose high enough that she needed another stem cell transplant. This time it was exceptionally difficult on her body. But after many issues and a lengthy hospitalization, Jan had a complete response. She is still in hematological remission today!

Although she still suffers from symptoms due to damage done to her heart, she is doing her best to lead a full life and is now “feeling back to her new normal.”

Janet  (not her real name – the patient asked to remain anonymous)

Janet received a diagnosis of Amyloidosis in June 2019, primarily affecting her kidneys and neurological system.

Her early symptoms included a lack of appetite, problems with bowel movements and sudden weight loss of 30 pounds. As her symptoms progressed, Janet suffered from low blood pressure and dizzy bouts and eventually would pass out upon standing. She had a tingling sensation between her toes, which progressed to constant, excruciating pain on the bottom of her feet.

Janet was dismissed at emergency rooms, with doctors saying her symptoms were either related to orthostatic hypotension or nothing.

She was misdiagnosed with MGUS and was being monitored by a hematologist because she had the markers for Multiple Myeloma.

As her symptoms continued to worsen, she visited her primary care physician who ordered a 24-hour urine sample. Janet was immediately sent to the emergency room when the results showed high amounts of protein in her urine. A kidney biopsy was performed and showed a diagnosis of Amyloidosis.

After facing CyBorD treatment, Janet is now on maintenance. Her neurological pain and weakness has worsened, and she is now using a walker.

She is too weak to be eligible for a stem cell transplant, but in Janet’s words “I’m hoping when I go back in June that this may change. Fingers crossed!”

Laura was diagnosed with AL Amyloidosis in the spring of 2018, at the age of 45. Her initial symptom was a chronic cough, which began six months earlier.  Diagnosed with asthma, Laura was treated with inhalers, nebulizers and steroids. The medications did nothing to improve her symptoms. As these issues continued, new problems emerged. Edema in her legs and ankles and an elevated BNP prompted her doctor to refer her to a cardiologist.

He tested and pursued answers until a diagnosis of Amyloidosis was confirmed. Because the Amyloidosis affects her heart, she has had an EKG, echocardiograms, a cardiac MRI, and a heart biopsy.

Laura’s last treatment was in October 2019. She is now monitored to ensure her levels remain normal. In Laura’s words: “I feel good most days. I know God is in control, so I try not to get too worked up.”

Amyloidosis presents itself in different ways with varying symptoms for each patient. Because of these differences, doctors often struggle to find an answer. If you are sick and searching for a diagnosis, please don’t give up. Follow your instincts, switch doctors, get second opinions, and keep going until you find out what is happening.

I was sick and I needed help. I remember sitting in the parking lot of the hospital, too embarrassed to go in because I didn’t want to be dismissed and made to feel like I was crazy. So, I sat. I sat in that parking lot and cried because I couldn’t find someone who would help me.

Soon after, I realized that this is MY LIFE and other people’s opinions of me didn’t matter. In my gut I knew I was sick.  I went back to doctors, and clinics and the ER again and again and again and I demanded answers. Until one day, a wonderful hematologist said to me, “It is obvious that you are very sick.”

And with that statement I felt relief. You’d think my first instinct would be fear, but I felt relieved. Because I finally found someone who believed me. And I feel in my heart that this beautiful lady saved my life. I will be forever grateful to her.

If this resonates with you, your answers are out there too. Keep searching.

We are thankful to our fellow Amyloidosis patients for sharing their stories with us. Knowing that you are not alone can be an extraordinary help when faced with a scary diagnosis. If you or a loved one has been recently diagnosed with Amyloidosis, reach out to find support in those who genuinely understand your battles. It can make all the difference.

Lori Grover is a guest blogger for Mackenzie’s Mission. She was diagnosed with AL Amyloidosis in 2016 and writes to share experiences and lessons learned during her journey.  More wonderful blogs by Lori can be found on her page Amyloid Assassin.  Lori is a freelance copywriter, and a mom of two wonderful boys. She loves writing, reading, and all things crafty.