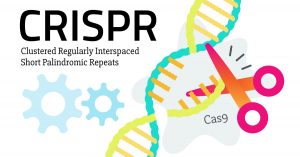 Per the National Institute of Health, “One of the most promising areas of research in recent years has been gene editing, including CRISPR/Cas9, for fixing misspellings in genes to treat or even cure many conditions.” In this piece we provide a clinical trial update for transthyretin (TTR) amyloidosis using this technology.

CRISPR FIXES GENES INSIDE THE BODY (3)

Per the National Institute of Health, “One of the most promising areas of research in recent years has been gene editing, including CRISPR/Cas9, for fixing misspellings in genes to treat or even cure many conditions.”

CRISPR is a highly precise gene-editing system that uses guide RNA molecules to direct a scissor-like Cas9 enzyme to just the right spot in the genome to cut out or correct disease-causing misspellings.

Science highlights a small study reported in The New England Journal of Medicine by researchers at Intellia Therapeutics, Cambridge, MA, and Regeneron Pharmaceuticals, Tarrytown, NY, in which six people with hereditary transthyretin (TTR) amyloidosis, a condition in which TTR proteins build up and damage the heart and nerves, received an infusion of guide RNA and CRISPR RNA encased in tiny balls of fat.The goal was for the liver to take them up, allowing Cas9 to cut and disable the TTR gene. Four weeks later, blood levels of TTR had dropped by at least half.” 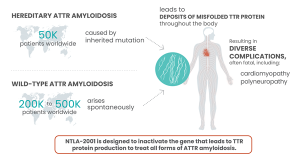 Intellia Therapeutics and Regeneron shared a press release recently announcing initial data from the cardiomyopathy arm of the ongoing Phase 1 trial of NTLA-2001, an investigational single-dose in vivo CRISPR-Cas9 therapy for the treatment of transthyretin (ATTR) amyloidosis.

According to that press release, the interim data include 12 adult patients with ATTR amyloidosis with cardiomyopathy (ATTR-CM) with New York Heart Association (NYHA) Class I – III heart failure. Single doses of 0.7 mg/kg and 1.0 mg/kg of NTLA-2001 were administered intravenously, and the change from baseline in serum transthyretin (TTR) protein concentration was measured for each patient. The data revealed that treatment with NTLA-2001 led to rapid and deep reductions of up to 94 % in serum TTR by day 28. In February 2022, the companies reported clinical data that revealed rapid, deep and sustained responses in a cohort of 15 patients with hereditary transthyretin (TTR) amyloidosis with polyneuropathy (ATTRv-PN).

ATTR is a rare, progressive disease, in which a protein known as TTR becomes misfolded and accumulates as plaques in tissues throughout the body. This causes serious complications that mainly involve the heart and nerves, and most patients die 2-15 years after disease onset. NTLA-2001 was the first in vivo CRISPR therapy to be administered to humans via the bloodstream. It is designed to treat ATTR by selectively reducing the levels of mutated TTR protein in the blood, through CRISPR-based inactivation of the TTRgene in liver cells.

Back in May, 2021 we wrote about the breakthrough gene-editing technology CRISPR being applied to hereditary transthyretin amyloidosis (hATTR), worthy of a background read for those unfamiliar with this science or those looking for a refresher.