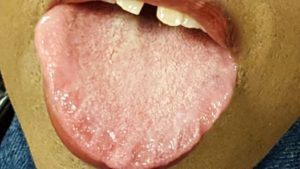 According to the NIH (1), macroglossia is the abnormal enlargement of the tongue in proportion to other structures in the mouth. It usually occurs secondary to an underlying disorder that may be present from birth (congenital) or acquired.

Symptoms associated with macroglossia may include drooling, speech impairment, difficulty eating, noisy, high-pitched breathing (stridor), snoring, airway obstruction, abnormal growth of the jaw and teeth, and ulceration. In some cases, the tongue may protrude from the mouth. (1) (3)

Talking may be affected. The large size of the tongue may also cause abnormal development of the jaw and teeth, resulting in misaligned or protruding teeth. Ulceration and dying tissue on the tip of the tongue may be other symptoms of the disorder. (3)

In addition to an enlarged tongue it is common to see indentations around the tongue perimeter from the constant pressure against the teeth.

Patients who graciously offered their picture for this blog reinforce many of these symptoms, including TMJ, difficulty swallowing, and breathing. Reiterated almost unanimously, eating is a problem – chewing and swallowing, clearing food from their mouth. Food gets stuck in front of their teeth. Speech is affected, and they often sound “slushy.” Snoring can get so bad it wakes them (and partners) up during the night. In addition, sometimes, their tongue gets sore from rubbing against their teeth.

Macroglossia can be associated with a wide range of congenital (present from birth) and acquired conditions (e.g., malignancies, metabolic/endocrine disorders, inflammatory or infectious diseases; amyloidosis), or it can occur as an isolated feature (with no other abnormalities). In most cases, it is due to vascular malformations (blood vessel abnormalities) and muscular hypertrophy (an increase in muscle mass). (1)

HOW IS IT TREATED?

Treatment depends upon the underlying cause and severity and may range from speech therapy in mild cases, to orthodontic procedures, to surgical reduction in more severe cases. (1) (3)