Most of the symptoms and signs of AL amyloidosis are non-specific and usually caused by a number of other common conditions.  But a few rare complaints are very suggestive of a diagnosis of AL amyloidosis.  Bruising of the skin around the eyes is one of these.  This is known as periorbital purpura in medical terminology, and may also be referred to as raccoon eyes or panda eyes. 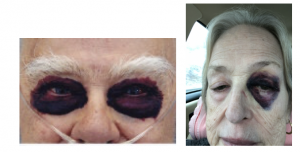 Although less than 15% of patients with AL amyloidosis experience this problem, it is hardly ever caused by anything else, so it should certainly prompt doctors to investigate the possibility of AL amyloidosis.

Periorbital purpura is dark, usually appears quite suddenly, and is quite different from the common phenomenon of shadows under the eyes.  The appearance is usually that of quite severe bruising.  Sometimes the bruising fades or even disappears during or after chemotherapy treatment, but this may take months.  Some patients with AL amyloidosis also experience easy bruising in other parts of the body.  Any rubbing of the skin can cause these to appear and they may then fade.  However the bruising round the eyes usually lasts for much longer.  It does not cause any pain or irritation and is only a cosmetic issue.

It is quite often the trigger for a doctor to check for the possibility of amyloidosis.