To make understanding the term amyloid a bit easier, let’s take a step back and talk briefly about proteins and their structure. An easy way to understand this process is by using an analogy to words and language. The fundamental building block of language is the alphabet and individual letters. Putting these letters together allows us to create words that have meaning, but words alone are not enough to fully communicate what we are trying to say. We must have sentences to convey our ideas. 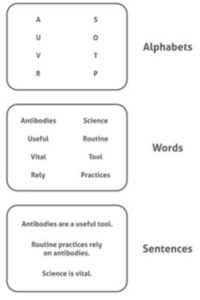 The same goes for proteins. The way they are able to function properly is through folding. In the graphic below, you see the progression of protein folding. It starts with an amino acid (i.e., letters), which are put together to create a string of amino acids, also known as the protein’s primary structure. This string of amino acids is then organized into an alpha helix or a pleated sheet (i.e., words) to create the protein’s secondary structure. Finally, the helix or sheet is folded into what is known as the tertiary structure (i.e., sentences). This is an essential biological step that allows proteins to carry out their natural process. 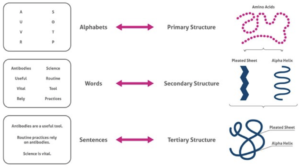 So with that rudimentary analogy, let’s bring it back to amyloid. The word amyloid simply refers to a protein folding pattern, meaning when proteins fold, they fold into an amyloid orientation. Instead of being folded into their proper orientation (i.e., tertiary structure), they are misfolded into an amyloid pattern.

To date, scientists have discovered 37 human proteins that are capable of forming amyloid, and each of these proteins is associated with a disease it can lead to.

But as mentioned earlier, amyloid can lead to diseases other than amyloidosis. Probably one of the most well known is Alzheimer’s disease. Alzheimer’s is associated with the amyloid precursor protein that forms from the β amyloid peptide. Other well-known diseases, such as Parkinson’s and Huntington’s disease, are also associated with amyloid. In Parkinson’s disease, the α-synuclein protein forms amyloid, whereas, in Huntington’s disease, Huntingtin exon 1 forms amyloid. Each is a distinct disease, but commonly involves the folding of an associated protein into amyloid. Even a specific type of prostate cancer results when Proteins S100A8/A9 form amyloid.

It’s a term I never entirely understood, so I hope this short article clears a few things up!