Cardiac Amyloidosis: Look to the Wrist for an Early Diagnostic Clue 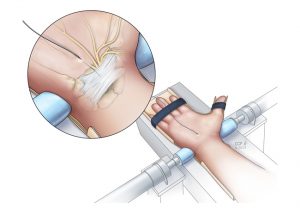 According to the Cleveland Clinic, tenosynovial tissue biopsy at the time of carpal tunnel surgery can be a useful tool for detecting cardiac amyloidosis at an earlier stage, suggests a recent Cleveland Clinic study in the Journal of the American College of Cardiology (JACC) (2018;72:2040-2050).

“We found that 1 in 10 older patients who underwent carpal tunnel release surgery for idiopathic carpal tunnel syndrome had either ATTR [transthyretin] or AL [light chain] amyloidosis in a sample of patients who had tenosynovial tissue removed,” says Cleveland Clinic cardiologist Mazen Hanna, MD, the study’s primary investigator. “This may be an early marker or precursor of amyloid heart disease.”

An accompanying editorial in JACC (2018;72:2051-2053) calls the investigation “a well-conducted pilot study that should be seen as a justification for larger screening efforts.”

The study was prompted by recognition that, despite the classic association of amyloidosis with carpal tunnel syndrome, the frequency of cardiac involvement at the time of carpal tunnel release surgery had never been established.

“The index patient that got us thinking about this project was operated on by Cleveland Clinic orthopaedic surgeon William Seitz, MD, a key collaborator on the study, who noted thickened tenosynovial tissue and astutely asked for a Congo red stain,” Dr. Hanna explains. “In the wake of that, we decided to undertake this study to determine the prevalence and type of amyloid deposits in carpal tunnel surgery patients and assess for cardiac involvement.”

So Drs. Hanna and Seitz, together with colleagues from Cleveland Clinic’s Heart & Vascular and Orthopaedic & Rheumatologic Institutes, ended up prospectively studying consecutive men aged 50 or older and women aged 60 or older undergoing carpal tunnel release surgery at Cleveland Clinic over a one-year period. They stained samples of tenosynovial tissue from all patients; those with confirmed amyloid deposits were typed with mass spectrometry and the patients underwent cardiac evaluation consisting of electrocardiography, echocardiography with longitudinal strain, technetium pyrophosphate scintigraphy and blood tests for biomarkers.

Of the 98 patients enrolled, 10 (10.2 percent) had a positive biopsy for amyloid — seven ATTR, two AL and one untyped. Two of these patients were diagnosed with hereditary ATTR, two were determined to have cardiac involvement (one AL, one ATTR wild-type) and three were started on pharmacologic therapy.

Notably, patients with ATTR demonstrated no difference in plasma transthyretin concentration or tetramer kinetic stability, which indicates that these measures likely cannot serve to detect cardiac amyloidosis on their own.

“Amyloid cardiomyopathy is an underrecognized cause of heart failure with preserved ejection fraction,” Dr. Hanna observes. “We believe that screening patients for amyloidosis when they have carpal tunnel surgery can be an inexpensive way to diagnose cardiac involvement early and help avert progressive heart failure.”

This is particularly true, he notes, with the advent of the first effective therapies for cardiac amyloidosis, which recently have rendered the condition medically treatable for the first time.

“The early recognition made possible by tenosynovial tissue biopsy is critical, since current treatment strategies suppress the production of precursor protein or prevent protein misfolding but do not directly target current amyloid deposits,” Dr. Hanna explains. “This allows for implementation of disease-modifying therapy prior to development of cardiac symptoms.”

He adds that the detection of AL in two of the 10 patients with biopsy-diagnosed amyloidosis is especially notable since AL cardiac amyloidosis tends to progress more rapidly and has a poor prognosis once cardiac involvement advances.

Time for a screening algorithm

Dr. Hanna and his colleagues are continuing to follow up the study cohort to observe and report additional noteworthy findings. In the meantime, these initial results, together with emerging data related to soft tissue amyloidosis, have prompted implementation of a new screening algorithm at Cleveland Clinic.

The algorithm, available as a supplementary online figure to the JACC study report, guides hand surgeons on the appropriateness of tenosynovial biopsy at the time of carpal tunnel release surgery. If Congo red staining is positive, typing with mass spectrometry and referral to an amyloidosis specialist is indicated.

The authors of the accompanying JACC editorial note that while the best screening methodology remains to be determined, “a screening algorithm will likely be incorporated into everyday clinical practice in the near future.”