Drugs are the lifeblood of patient treatments, and the development of new drugs is critical. Overseen by the FDA (U.S. Food and Drug Administration), they define a drug as “any product that is intended for use in the diagnosis, cure mitigation, treatment, or prevention of disease; and that is intended to affect the structure or any function of the body.”

The FDA’s Center for Drug Evaluation and Research (CDER): “The center’s evaluation not only prevents quackery, but also provides doctors and patients the information they need to use medicines wisely. CDER ensures that drugs, both brand-name and generic, are effective and their health benefits outweigh their known risks.”

There are several phases (comprising twelve steps) of the FDA drug development and approval process, depicted in a two-page graphic here, and described below. 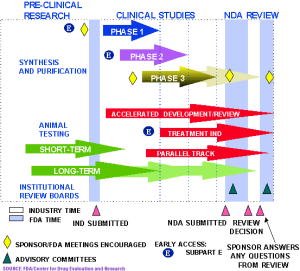 This is the drug sponsor’s discovery and screening phase, comprising two steps.

The Start. The sponsor develops a new drug compound and seeks to have it approved by the FDA for sale in the U.S.

Step 1: Animals Tested. The sponsor must test the new drug on animals for toxicity. Multiple species are used to gather basic information on the safety and efficacy of the compound being investigated/researched.

Step 2: IND Application. The sponsor submits an Investigational New Drug (IND) application to the FDA based on the results from initial testing that includes the drug’s composition and manufacturing, and develops a plan for testing the drug on humans (aka a clinical trial).

The FDA reviews the IND to assure that the proposed studies, generally referred to as clinical trials, do not place human subjects at unreasonable risk of harm. The FDA also verifies that there are adequate informed consent and human subject protection.

This phase is all about the clinical trial, all of which must be approved by the FDA before they can begin. In an earlier blog – Clinical Trials 101 – we offer an expanded discussion along multiple facets regarding clinical trials which you may find informative.

According to the National Institutes of Health (NIH), clinical trials are research studies performed on people that are aimed at evaluating a medical, surgical, or behavioral intervention. Clinical trials are the primary way that researchers find out if a new treatment, like a new drug or medical device (e.g., a pacemaker) is safe and effective in people. Often a clinical trial is used to learn if a new treatment is more effective and/or has less harmful side effects than the standard treatment. Other clinical trials test ways to find a disease early, sometimes before there are symptoms. Still, others test ways to prevent a health problem before it begins. A clinical trial may also look at how to make life better for people living with a life-threatening disease or a chronic health problem.

Clinical trials are comprised of four phases to test a treatment, find appropriate dosages, and detect side effects. If following the completion of the first three phases, researchers find the drug or intervention to be safe and effective, the FDA approves it for clinical use and continues to monitor its effects. The fourth phase continues post-FDA approval. Overall, the duration of a clinical trial spans years.

Step 3: Phase I Trial. A Phase I trial tests an experimental treatment on a small group of often healthy people (20 to 80 in number) to judge its safety and side effects and to find the correct drug dosage.

Step 4: Phase 2 Trial. A Phase II trial uses more people (100 to 300 in number). While the emphasis in Phase I is on safety, the emphasis in Phase II is on effectiveness. This phase aims to obtain preliminary data on whether the drug works in people who have a certain disease or condition. These trials also continue to study safety, including short-term side effects. This phase can last several years.

Step 5: Phase 3 Trial. A Phase III trial gathers more information about safety and effectiveness, studying different populations and different dosages, using the drug in combination with other drugs. The number of subjects usually ranges from several hundred to about 3,000 people. If the FDA agrees that the trial results are positive, it will approve the experimental drug or device.

Step 6: Review Meeting. The FDA meets with the sponsor prior to submission of the NDA.

Step 7: NDA Application. The sponsor formally asks the FDA to approve a drug for marketing in the United States by submitting an NDA. An NDA includes all animal and human data and analyses of the data, as well as information about how the drug behaves in the body and how it is manufactured.

Steps 8-9: Application Reviewed. After an NDA is received, the FDA has 60 days to decide whether to file it so it can be reviewed. If the FDA files the NDA, the FDA Review Team is assigned to evaluate the sponsor’s research on the drug’s safety and effectiveness.

Step 11: Facility Inspection. The FDA inspects the facilities where the drug will be manufactured.

Step 12: Drug Approval. The FDA reviews will approve the application or issue a response letter.

Phase IV clinical trial for drugs or devices takes place after the FDA approves their use. A device or drug’s effectiveness and safety are monitored in large, diverse populations, where the sponsor is required to submit periodic safety updates to the FDA. Sometimes, the side effects of a drug may not become clear until more people have taken it over a longer period of time.

A team of CDER physicians, statisticians, chemists, pharmacologists, and other scientists review the drug sponsor’s data and proposed labeling of drugs.

WHAT OTHER DRUG PRODUCTS ARE REGULATED BY THE FDA?

Drugs include more than just medicines. For example, fluoride toothpastes, antiperspirants (not deodorant), dandruff shampoos, and sunscreens are all considered drugs.

FDA approval of a drug means that data on the drug’s effects have been reviewed by CDER, and the drug is determined to provide benefits that outweigh its known and potential risks for the intended population.